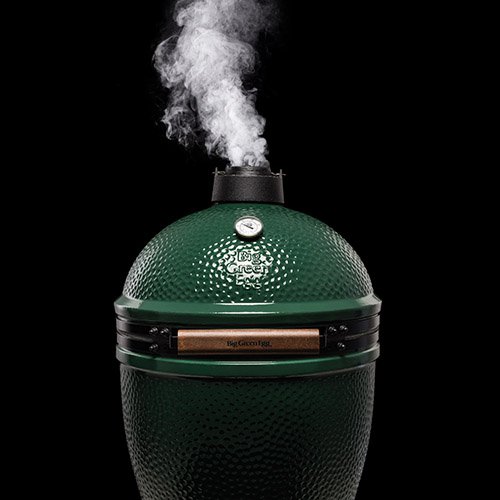 The outdoor grill barely quivers, without billowing any eye-watering smoke signals, and it provides the only dash of deep color on this otherwise monochrome gray deck. To someone who hasn’t watched a cooking show or attended an upper-middle-class dinner party during the past decade, it would look distinctly foreign—either prehistoric or futuristic, as if it holds the fetus of a brontosaurus or thrums like some ominous extraterrestrial pod from science fiction. In any case, the Big Green Egg is about to hatch something wondrous.

“See, most grills would have smoked all over the place at this point,” says chef Kevin Rathbun, demonstrating the cooker he uses at his Morningside home. “With a low heat, you can walk away from it for hours, all night even, but at this high heat—about 700 degrees—you really need to burp the egg to let air in slowly. It’s demanding oxygen to breathe.” He gently lifts the 40-pound domed lid, which releases a small plume of smoke and reveals a sizzling 30-ounce porterhouse steak. It’s exquisitely charred in eight minutes, and then Rathbun slings a mammoth curl of lobster tail on the grill, along with some lightly seasoned yu choy greens.

“See how tender and juicy everything is?” he says. “The tight seal and the sheer thickness of the ceramic material is the best at retaining moisture, so your food never dries out.”

This cooker—which functions as a multipurpose hybrid of grill, smoker, and outdoor oven—has fed friends and philanthropists for the many charity dinners Rathbun holds at home, but he also employs one at Kevin Rathbun Steak, his critically acclaimed steakhouse, and at KR SteakBar. “People associate it with meat and ribs, but I’ve found it’s essential for vegetables, too, because not everybody wants bacon in the Brussels sprouts,” he says. “I also use it a lot for stocks, and I use it for fish and shellfish—especially razor clams—and pork butts, grilled meatballs, fondues, smoked butter, smoked tomato grits. People use it for pizza and desserts. It’s one of the most versatile pieces of equipment. And it’s forgiving—it’s pretty hard to screw up anything on the Egg.” 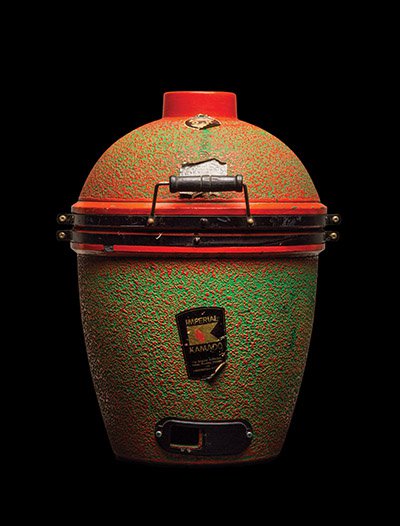 One of the earliest fire clay cookers that Ed Fisher imported from Asia in the 1970s.
Photograph by Josh Meister

If this product has a celebrity pitchman, it’s Rathbun. Almost 20 years ago, he discovered the peculiar-looking cooker the way most people do: as the worshipped totem at a friend’s dinner party. He was working as the chef at Nava and sought out the BGE’s headquarters, then a one-man operation in a small strip mall storefront at the intersection of Clairmont Road and Buford Highway. “I was in my chef pants, looking around, and the store owner fitted me out with a large grill,” he recalls. “I loved it but thought I was just trying it out, so I tried to return it a month later, but he gave it to me.”

As a thank-you, Rathbun starred in a video tutorial on how to use the product. That’s why, if you’ve popped into Ace Hardware, where the video still plays on a loop sometimes, you likely have heard Rathbun’s bassoon-like voice urging you to burp your Egg.

That promotional gesture—bestowing the product on one of the city’s up-and-coming chefs—is typical of the company’s founder, Ed Fisher, who has built a verdure-hued empire on old-school entrepreneurialism and gushing word of mouth since he began selling the cookers in the early 1970s. Earlier this year, the Big Green Egg moved into a gleaming new 35,000-square-foot headquarters in Doraville, featuring an exhibit of Eggs through the ages and a “Le Cordon Green” culinary center that seats 65 students for two classes a week, with more space on a commodious deck for alfresco grilling. Eggs are sold in more than 3,000 stores in the United States and in 50 countries. Recently the company rolled out an XXL Egg, large enough for suckling pigs, as well as a Mini Max, lighter and ideal for camping. Devout followers (called, Eggheads, of course) turn out by the thousands for “Eggfests” around the country; they’re clad in more green—with hair and dogs dyed to match—than a Saint Patrick’s Day parade.

No one has done formal research on the demographics of the phenomenon, but judging by crowd photos at Eggfests, most users—like the Parrotheads at a Jimmy Buffett concert—are fun-seeking white guys over 35. With a price tag that hovers around $850 or more, the Big Green Egg calls for a certain amount of disposable income, and the traditional division of household labor leaves the barbecue tongs to men. More and more women, though, are mastering this type of cooking; the Big Green Egg Culinary Center offers a Girls and Grills class that fills up fast. “My daddy was an early Egghead in Tifton,” Patricia Tinsley says. “He advised me to leave the grilling to my guy.” Tinsley didn’t take the advice. Now she’s an Atlanta hostess and foodie who bills herself as the “Grill Girl.” 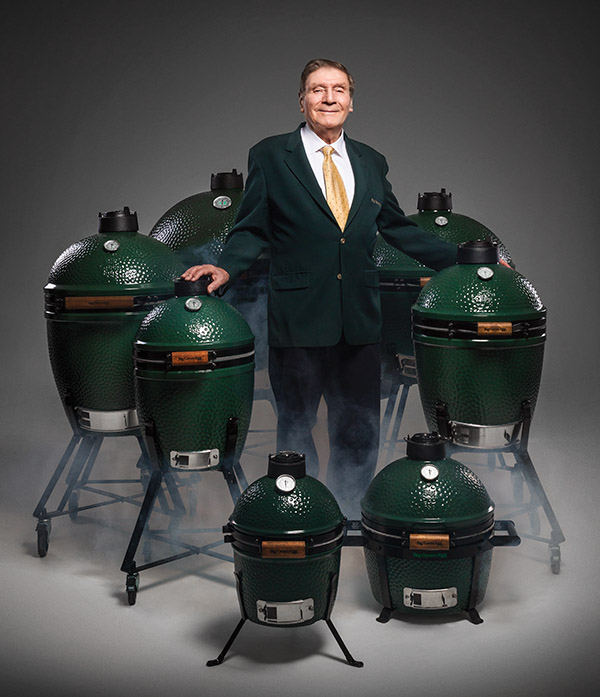 The Big Green Egg derives from a simple idea with an ancient lineage, as evidenced by pottery shards of cooking vessels in middens around the world. More specifically, it’s an updated iteration of a commonplace Asian rice cooker: the kamado, a Japanese word that translates as “place for the cauldron.” The Egg’s modern design, which uses durable ceramics, is modeled on the cookers traced first to the Chinese Qin Dynasty and then used by the Japanese beginning in the third century, says Fisher, who discovered the apparatus, like many servicemen of his generation, during his travels in Asia as a Navy engineer.

What makes kamados different from other metal charcoal grills is their heavy, airtight seal that holds in moisture, with small vents at the top and bottom to control air flow with precision. The focused heat also can be held to low temperatures for smoking. A kamado has a quick startup time; it’s ready to cook in just a few minutes. Moreover, the natural lump charcoal burns hotter and more efficiently than briquettes, and it produces little ash to clean up.

In fact, the physics of it prove so straightforward, and the success of the Egg so salivating, that at least a dozen other manufacturers have sprung up. Three other companies—Primo, Grill Dome, and Kamado Joe—are now based in metro Atlanta, which the New York Times pronounced “the de facto hub for ceramic cookers.” Each jockeys to distinguish itself, and each has rabid fans, arguing online with the same evangelical fervor devoted to debates about Carolina versus Texas barbecue. The flatter, oval-shaped Primo grills boast an American-made advantage. (Big Green Eggs are manufactured in Mexico.) “We’re the only ceramic grill made here,” says company spokesperson Derald Schultz. “All phases of our production from mixing, molding, firing, assembly, inspection, and packaging take place at our factory in Tucker. So we have the distinct advantage of controlling our production and overseeing quality control on a day-to-day basis.”

Grill Dome cookers, with headquarters in Suwanee and manufacturing in India, come in three sizes, all customizable. “Mine is pink!” says Lynne Sawicki, who uses it alongside both a Big Green Egg and a Primo grill. She owns Sawicki’s Meat, Seafood and More in Decatur. “Because of their radiant heat, they act as a sort of sauna for meat. I fire them up at night and leave them on while I sleep.”

Kamado Joe, meanwhile, touts the accessories included in the price of one of its China-made grills: an ash tool, the “Divide & Conquer” flexible cooking system (a tiered surface area for cooking multiple items at the same time), and a grate removal tool. The Duluth-based company’s motto is “It Comes with All That?!”

None of these privately held companies will release sales figures, but the Big Green Egg, which cites annual growth of as much as 20 percent for the past few years, clearly dominates the market. Fisher takes an “imitation is the sincerest form of flattery” stance toward his competitors. “All those companies compare themselves to us one way or another,” he says, shrugging, “and as long as they talk about us, they drive our sales figures higher.” 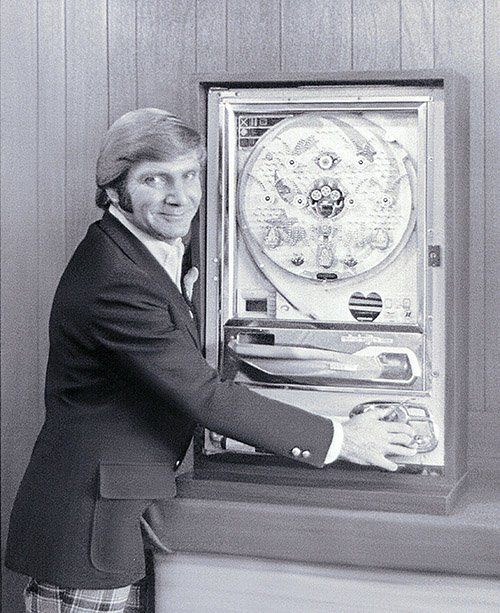 Fisher, an 81-year-old smoothie with Old World courtliness, proudly wears a hunter-green blazer when he is on the clock, and there are fresh comb tracks in his neatly parted thatch of hair. He grew up in South Philadelphia, the son of a furrier who fled Russia. Fisher is a bit of an audiophile—his Buckhead home includes a shrine to Sinatra—but he comes by it naturally: He’s cousins with Eddie Fisher, the late crooner.

Ed Fisher earned a degree in psychology from Temple and served in the Navy, but he dreamed of following the lead of his three older brothers, all successful business owners. He peddled pachinko machines, a kind of Japanese arcade game, in Miami before coming to Atlanta. “I had only been here once, but it was the closest big city to Florida, and my partner and I wanted to branch out,” he says. (A black-and-white photo in the Egg museum shows Fisher grinning and posing with one of his pachinko machines.)

Sales lagged between holidays, so Fisher sought to round out his inventory by importing kamado cookers from Japan. “I remembered this steak that I’d had overseas,” he says. “It tasted so good with so little fuss. I thought the cookers might go over here.”

For a while, they just gathered dust, crammed into storage. He reassessed his marketing. “‘Let’s go down to Pachinko House and get a kamado’ doesn’t exactly roll off the tongue,” he says. “So I started thinking about a more American-sounding name. They’re egg-shaped, obviously, and large. I started thinking about colors and thought, Green is a nice enough color. Why not? Big Green Egg seemed to fit just right.”

He also began preparing chicken wings, letting the aroma waft to the sidewalk, and handing them out to passersby. Still, Fisher’s early imports were prone to cracking and other problems, so he began to tweak the design, using input from his customers. One suggested a thermometer, so in it went. Another suggested natural charcoal instead of briquettes, which burned too fast and could leave a bad taste in the food.

In 1995, he made a handshake deal with a factory in Monterrey, Mexico, to produce his own, improved version of the kamado, using a higher grade of ceramics. Suddenly there was plenty of green to go around. The company has been courted by “all of the mass-market retailers,” Fisher claims, but he prefers to limit distribution to speciality vendors. “I want them sold by people who are knowledgeable and trained to do a demonstration,” he says.

The Eggfests, too, please him, not so much with the green-haired spectacle as with their spirit. “People come together to cook, and they share their food with each other, along with their recipes and techniques,” he says. “The Egg fosters a sense of sharing that creates community, and that is what matters to me.”

On a recent evening at a Big Green Egg 101 class at Le Cordon Green, the mood is festive, chatty, and clubby, and the crowd of about 25 is diverse, with the male-to-female ratio hovering around 60:40. One man says he drove all the way from Alabama to get some pointers, and a class clown announces that he likes his meat “so rare that a good vet could still save it.” Helpers in green aprons bustle around, providing beer, wine, and soft drinks for students who sample the end results of the folksy, how-to tutorial on recipes such as baby back ribs with sweet chile sauce, spatchcock chicken, and grilled romaine lettuce. “We try to put on a show,” says emcee Doug Goolsby.

One student, Gary Chichester, a construction project manager, offers some testimony: “When I have dinner parties now, everybody congregates around my Egg while I explain it, and they just marvel at it. It really makes cooking fun and makes a get-together more than just a regular party. It becomes an event—a lifestyle, even.”